The Purpose Of Leadership 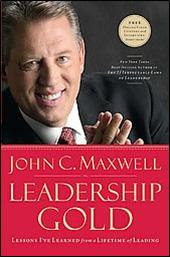 In over thirty years of leadership, one lesson I learned very early on was that taking people to the top is more fulfilling to me personally than arriving alone. I wrote about this in my recent book of all-new material, Leadership Gold: Lessons I’ve Learned from a Lifetime of Leading. Here’s an excerpt to illustrate:

A few years ago I had the privilege of speaking on the same stage as Jim Whittaker, the first American to climb Mount Everest. During lunch I asked him what had given him the most fulfillment as a mountain climber. His answer surprised me.
“I have helped more people get to the top of Mount Everest than any other person,” he replied. “Taking people to the top who could never get there without my assistance is my greatest accomplishment.”

Evidently this is a common way of thinking for great mountain guides. Years ago I saw an interview with a guide on 60 Minutes. People had died while attempting to climb Mount Everest, and a surviving guide was asked, “Would the guides have died if they were not taking others with them to the top?”

“No,” he answered, “but the purpose of the guide is to take people to the top.”
Then the interviewer asked, “Why do mountain climbers risk their lives to climb mountains?”

The guide responded, “It is obvious that you have never been to the top of the mountain.”

I remember thinking to myself that mountain guides and leaders have a lot in common. There is a big difference between a boss and a leader. A boss says, “Go.” A leader says, “Let’s go.” The purpose of leadership is to take others to the top. And when you take others who might not make it otherwise to the top, there’s no other feeling like it in the world. To those who have never had the experience, you can’t explain it. To those who have, you don’t need to.

Jesus On Leadership …
“… Those who are the greatest among you should take the lowest rank, and the leader should be like a servant. … For I am among you as one who serves.” ~Luke 22:26-27 (NLT)