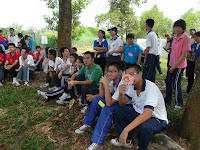 National Service Training School. The camp was held on 10th to 13th June 2009. The objectives of the camp were to build up the brigade members physically and discipline themselves in drill, to learn team building, to experience and equip themselves for National Service training and also to enjoy gathering as one family of the Brigade. About 90 officers and brigade members participated in this camp.

Day 1 – 10th June 2009
All the campers entered the camp at 7.30am for the registration and immediately moved into their accommodation before leaving to the National Service Training School. Upon arrival the members were given a briefing and the group was divided into three smaller groups to have their drill session which was conducted by the NS instructors. Members learned how to read the bearing of a compass among other things. After lunch, the members had low rope course with a few games; such as rope creativity, Hole in ONE, balancing log, king 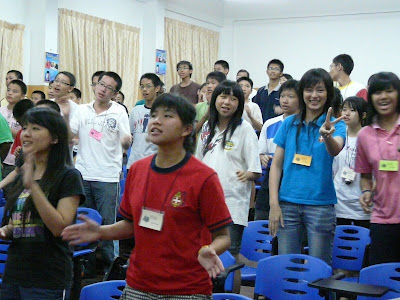 finger and etc. Before leaving the training school the members had their second drill session under the hot sun. During the evening at Sung Siew Primary School, there was a time of Praise & Worship led by BB officer Jackey Tan, and Rev. James Wong shared a challenging message on true friendship.

Day 2 – 11th June 2009
Everyone woke up at 6.00am and had their breakfast before moving to the National Service Training School. Members participated in the high rope course which is known as the flying fox. Some of the girls were frightened at first but they eventually attempted the game and screamed as loud as thunder while flying down from the high tower. The members were led into the jungle and learnt how to set up a fire for cooking as part of the jungle survival skills. After lunch, the members had their drill session as their last activity for the day. At night, Pr. Yoa Ye Jiun was invited to give a sharing for the Praise & Worship session. All the campers were brought to worship God and they enjoyed gathering as one family.

Day 3 - 12th June 2009
It was the last day to the NS training school. The first activity for the day was the drill rehearsal for the camp closing ceremony. Members were introduced to many station games. Some of the games were tough and a few members dropped into the pool while others watched and laughed their lung out. Every group was also given a compass and a list of places to explore around the training school. In the evening there was BBQ for dinner until late into the night. As this was the last evening of the camp, some members played football on the field before retiring for the night.
Day 4 – 13th June 2009
After breakfast the members had their last rehearsal for the drill presentation. After lunch the memb 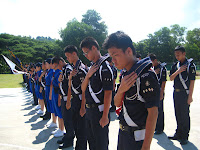 ers wore their full uniform and prepared for the closing ceremony. A few of the campers helped in the refreshments and photos exhibition. Around 1.00pm, the parents, visitors and members who did not join the camp came to attend the closing ceremony, while Isaac Pang, as the guest of honor attended the closing ceremony at 2pm and the campers march in with the guard of honor and colour party. Then, there were different drill presentations by the campers with different groups. At the end of the ceremony the guest of honor was given a memento and refreshment was served for the guests, parents, and visitors. Around 3.30pm, the members returned home, fully exhausted but with sweet memories that will remain with them a life time.