Oct 28, 09 7:03pm
The High Court here today fixed Nov 10 to arrive at a decision on whether to set aside or uphold its own order in allowing eight parties to intervene in the matter relating the use of the word "Allah" in the weekly publications of The Herald magazine.

Justice Lau Bee Lan set the date in chambers after hearing submissions from the contesting parties on the Kuala Lumpur Roman Catholic Church's application to set aside the court's order.

Counsel S Selvarajah, who is representing the church, informed the media that the church had submitted to court that based on the Federal Court ruling on Sept 3 in the case of Majlis Agama Islam Selangor vs Bong Boon Chuen & 150 others, the High Court had no jurisdiction to allow intervention in judicial review proceedings under Order 15 Rule 6(2)(b) of the Rules of the High Court 1980. 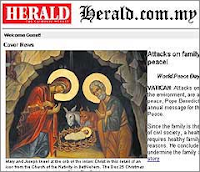 In opposing the application, one of the interveners' counsel, Abdul Rahim Sinwah, submitted that the eight parties had legal interest to be interveners in the judicial review proceedings.

On Aug 3, the court allowed eight parties, including Islamic religious councils, to be interveners in the new application by Archbishop Murphy Pakiam for a judicial review over the usage of the word "Allah" in the church's publications. In her ruling, Lau had held that the eight parties - the Islamic religious councils of Perak, Terengganu, Penang, Selangor, Kedah, Johor and Malacca, and the Malaysian Chinese Muslim Association - had legal interest in the issue.

On Feb 16, Pakiam, as the publisher of The Herald, filed a new application for a judicial review after a similar application in 2008 was deemed academic following the expiry of The Herald's publication permit for Jan 1 to Dec 31, 2008.

In the application, naming the Home Ministry and the government as respondents, he is seeking, among other things, a declaration that the decision by the respondents on Jan 7, 2009, prohibiting him from using the word "Allah" in the "Herald-The Catholic Weekly" publication was illegal and that the word "Allah" was not exclusive to the religion of Islam. –Bernama
Posted by Rev. Johnny Wong at 11:09 PM