Easter is the focal point of the Christian faith. Jesus rose from the dead on the third day after his crucifixion. On Easter Day we celebrate the resurrection of Jesus Christ.

The resurrection of Jesus Christ is the foundation of the Christian faith and without it there will be no Christian faith. The New Testament was written after the reality of the resurrection of Christ. This is how Paul describes the importance of Christ’s resurrection: “And if Christ has not been raised, then all our preaching is useless, and your faith is useless … and you are still guilty of your sins. In that case, all who have died believing in Christ are lost! And if our hope in Christ is only for this life, we are more to be pitied than anyone in the world.” 1 Corinthians 15:14, 17-19 (NLT).

2. Christ died to demonstrate God’s love for us. “But God demonstrates his own love for us in this: While we were still sinners, Christ died for us.” Rom 5:8 (NIV). The suffering and death of Jesus Christ on the cross is to show us the extent of God’s love for mankind. The most well known verse in the Bible says this: “For God so loved the world that he gave his one and only Son, that whoever believes in him shall not perish but have eternal life.” John 3:16-17 (NIV).

3. Christ died to reconcile us to God. “For if, when we were God's enemies, we were reconciled to him through the death of his Son, how much more, having been reconciled, shall we be saved through his life!” Rom 5:10-11 (NIV). Being reconciled to God we become children of God and we address God as our heavenly father.

4. The resurrection of Christ confirms it all. In Christ’s death we find forgiveness, salvation and hope of eternal life. How do we know all these are true? The resurrection of Jesus is the evidence. “… everyone who belongs to Christ will be given new life. But there is an order to this resurrection: Christ was raised as the first of the harvest; then all who belong to Christ will be raised when he comes back.” 1 Cor 15:22-23 (NLT). Christ’s resurrection proves that he conquered death and he is the Messiah, the Savior of the world. There is eternal life beyond the grave. Therefore death died on Easter Day.

Posted by Rev. Johnny Wong at 6:20 PM No comments:

Transforming Power of the Resurrection

5 The angel said to the women, "Do not be afraid, for I know that you are looking for Jesus, who was crucified. 6 He is not here; he has risen, just as he said. Come and see the place where he lay. ~Matthew 28:5-6 (NIV)

1. The Transformation of the Cross and the Tomb

2. The Transformation of Time

Seventy years is all we have — eighty years, if we are strong; yet all they bring us is trouble and sorrow; life is soon over, and we are gone. ~Ps 90:10 (TEV)

"I tell you the truth, those who listen to my message and believe in God who sent me have eternal life. They will never be condemned for their sins, but they have already passed from death into life.” ~John 5:24 (NLT)

3. The Transformation of Life

4. The transformation of Death

54 “So when this takes place, and the mortal has been changed into the immortal, then the scripture will come true: "Death is destroyed; victory is complete!" 55 "Where, Death, is your victory? Where, Death, is your power to hurt?" 56 Death gets its power to hurt from sin, and sin gets its power from the Law. 57 But thanks be to God who gives us the victory through our Lord Jesus Christ!” ~1 Cor 15:54-57 (TEV)

Posted by Rev. Johnny Wong at 6:18 PM No comments:

Email ThisBlogThis!Share to TwitterShare to FacebookShare to Pinterest
Labels: Sermon Outline For The Week

How To Develop A Generous Heart (Part 2) 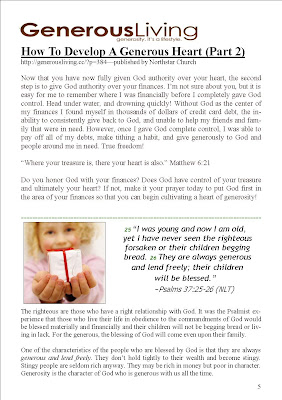 Posted by Rev. Johnny Wong at 6:17 PM No comments:

THE TRUE MEANING OF EASTER 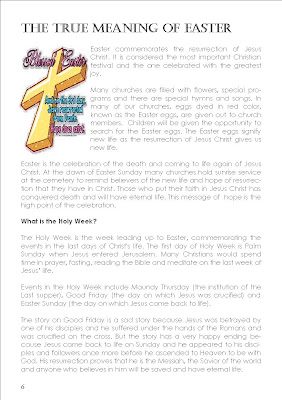 Posted by Rev. Johnny Wong at 6:16 PM No comments: 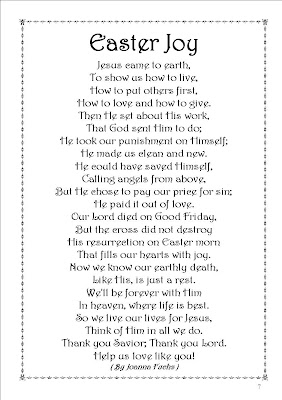 Posted by Rev. Johnny Wong at 6:14 PM No comments:

Coming Seminar: The Person & the Work of the Holy Spirit 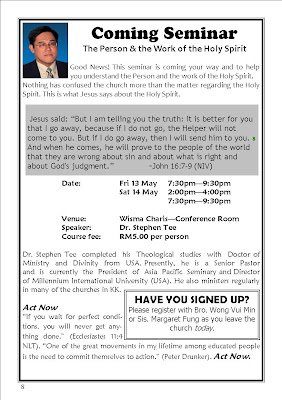 Posted by Rev. Johnny Wong at 6:13 PM No comments:

Last Day To Register For the Church Family Camp 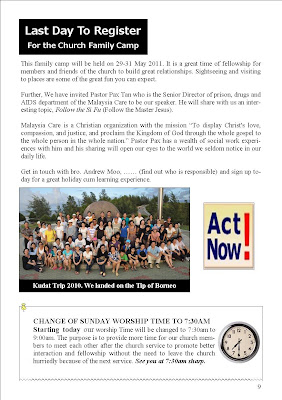 Posted by Rev. Johnny Wong at 6:11 PM No comments: 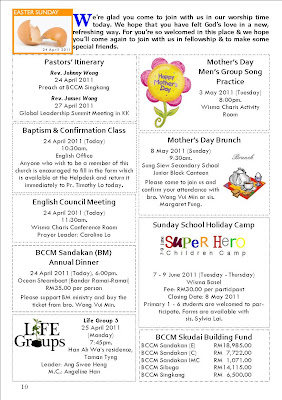 Posted by Rev. Johnny Wong at 6:10 PM No comments:

Church Activities For This Week 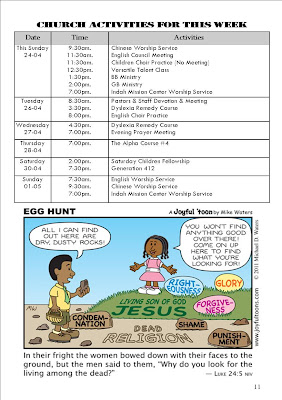 Posted by Rev. Johnny Wong at 6:08 PM No comments:

Email ThisBlogThis!Share to TwitterShare to FacebookShare to Pinterest
Labels: Church Activities Of The Week

The Triumphal Entry To Jerusalem

This Sunday is Palm Sunday and Christians celebrate the Triumphal Entry of Jesus Christ into Jerusalem, a week before his death and resurrection. For many churches, Palm Sunday is referred to as “Passion Sunday,” which marks the beginning of the Holy Week that concludes on Easter Sunday. The biblical account of Palm Sunday was recorded in Matthew 21:1-11, Mark 11:1-11, Luke 19:28-44, and John 12:12-19.

It was Passover time. Jerusalem and the whole surrounding neighborhood was crowded with pilgrims. It was estimated that there were two and a half million people who had crowded their way into Jerusalem for this national festival. The law required that every adult male Jew who lived within twenty miles of Jerusalem must come to the Passover.

There are three things about the Lord Jesus Christ in his journey to Jerusalem.

1. It Shows Us Jesus’ Courage: He took the final journey.

Jesus knew that the journey to Jerusalem was his last, a journey that would lead to his death, burial and resurrection. This was what he said to his disciples while he was on the way to Jerusalem, "We are going up to Jerusalem, and the Son of Man will be betrayed to the chief priests and the teachers of the law. They will condemn him to death and will turn him over to the Gentiles to be mocked and flogged and crucified. On the third day he will be raised to life!" Matthew 20:17-19 (NIV). Jesus knew the details of his suffering. The execution on the cross was the cruelest form of punishment that even the Romans eventually abolished it in 337 A.D.

2. It Shows Us Jesus’ Claim: He is the Messiah

He is the Messiah, the Anointed One, the chosen one of God to be the savoir of the world. His resurrection from the death is the final proof of his claim to be the savior of the world. About 500 years before Christ was born, the Prophet Zechariah prophesied about the messiah’s journey to Jerusalem with these words: “Rejoice greatly, O Daughter of Zion! Shout, Daughter of Jerusalem! See, your king comes to you, righteous and having salvation, gentle and riding on a donkey, on a colt, the foal of a donkey.” Zech 9:9 (NIV). , the prophecy was fulfilled.

3. It Shows Us Jesus’ Appeal: He is the King of Peace

Jesus came humbly and riding upon an ass. Seldom a king came riding upon an ass, but when he did, it was the sign that he came in peace. Jesus entered Jerusalem, gentle and riding on a donkey. He came as a King of Peace. The Prophet Isaiah prophesied that the Messiah would be called the “Prince of Peace.” Isa 9:6. When Jesus reigns in our hearts we have the peace of God and the strength to live in peace with others. Jesus taught that “Blessed are the peacemakers, for they will be called sons of God.” Matt 5:9 (NIV).

It was a Triumphal Entry because Jesus completed the journey and became our savior.

Posted by Rev. Johnny Wong at 6:12 PM No comments:

1. It was a journey of suffering

Jesus talked about carrying our cross daily to follow him and he himself had taken the journey of the cross (Luke 9:23). If you suffer, suffer with courage and don’t give up.

“As the time approached for him to be taken up to heaven, Jesus resolutely set out for Jerusalem” ~Luke 9:51 (NIV)

“and the Son of Man will be betrayed to the chief priests and teachers of the law. They will condemn him to death and will hand him over to the Gentiles, who will mock him and spit on him, flog him and kill him. Three days later he will rise.”

2. It was a journey of peace

Jesus came riding on a donkey which means, he came to bring peace. He said,

"Happy are those who work for peace; God will call them his children! (Matt 5:9 TEV).

“Rejoice greatly, O Daughter of Zion! Shout, Daughter of Jerusalem! See, your king comes to you, righteous and having salvation, gentle and riding on a donkey, on a colt, the foal of a donkey.” ~Zech 9:9 (NIV).

36 As he went along, people spread their cloaks on the road. 37 … the whole crowd of disciples began joyfully to praise God in loud voices for all the miracles they had seen: 38 "Blessed is the king who comes in the name of the Lord!" "Peace in heaven and glory in the highest!" ~Luke 19:36-38 (NIV)

“If it is possible, as far as it depends on you, live at peace with everyone.”

3. It was a journey of servanthood

In Jerusalem Jesus served humanity and gave his life as a ransom for many. To follow Jesus is to have a serving attitude that pervades all aspect of our life.

“Instead of this, of his own free will he gave up all he had, and took the nature of a servant. He became like man and appeared in human likeness.” ~Phil 2:7 (TEV)

Posted by Rev. Johnny Wong at 6:10 PM No comments:

Email ThisBlogThis!Share to TwitterShare to FacebookShare to Pinterest
Labels: Sermon Outline For The Week

How To Develop A Generous Heart (Part 1) 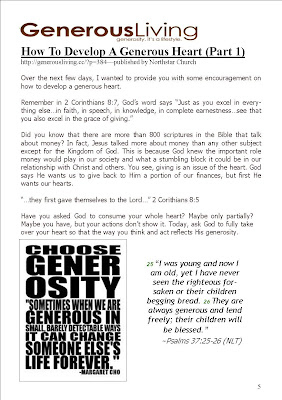 Posted by Rev. Johnny Wong at 6:09 PM No comments:

What is Ash Wednesday? 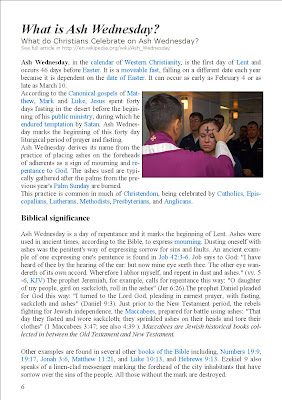 Posted by Rev. Johnny Wong at 6:07 PM No comments:

What is Lent? When Does Lent Occur? What Do Christians Do During Lent? 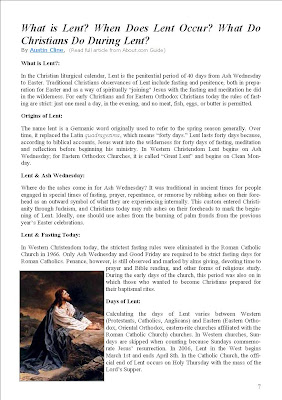 Posted by Rev. Johnny Wong at 6:06 PM No comments: 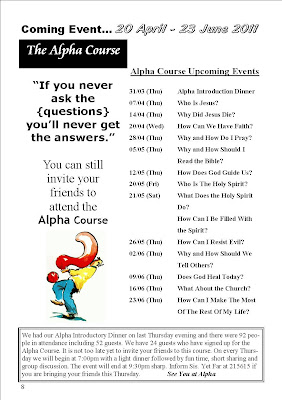 Posted by Rev. Johnny Wong at 6:05 PM No comments: 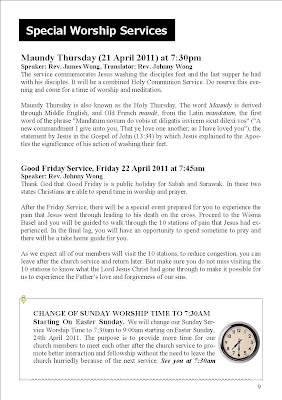 Posted by Rev. Johnny Wong at 6:04 PM No comments: Posted by Rev. Johnny Wong at 6:02 PM No comments:

Church Activities For This Week 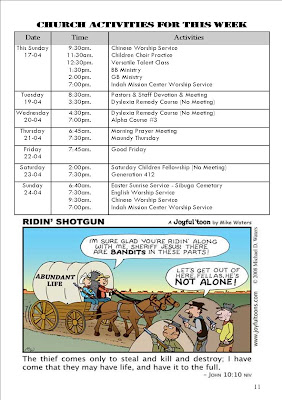 Posted by Rev. Johnny Wong at 6:02 PM No comments: